Discussion Platform ‘Russia in Face of New Challenges: with Whom and on What Terms are We Cooperating?’ 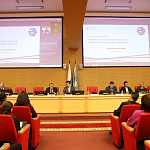 On November 22, 2022, as part of the first day of the VII FinU International Forum “Economic Fights without Rules: Tips for Victory”, was conducted a discussion platform “Russia in the Face of New Challenges: with Whom and on What Terms are We Cooperating?”. Among the topical issues are the reformatting of the world economy, changes in the world power and decision–making centers, Russia’s role in the world order transformation, the power balance in the world community.

The event was moderated by the Dean of the Faculty of International Economic Relations of the FinU, Doctor of Political Sciences Pavel Seleznev.

During the discussion, the experts covered the key challenges facing Russia’s political course in the context of increasing geopolitical tensions and the modern world order transformation. The speakers stressed the need to strengthen sovereignty, independence, state and territorial integrity, protect the traditional spiritual and moral foundations of Russian society, ensure defense and security, and prevent interference in Russia’s internal affairs.

The discussion was attended by Deputy Chairman of the State Duma of the Russian Federation Boris Chernyshov; Rector of the Belarusian State Economic University, member of the Standing Committee on Legislation of the House of Representatives of the National Assembly of the Republic of Belarus Alexey Egorov; Director General of VCIOM Valery Fedorov; Director General of the Center for Political Information Alexey Mukhin; President of the Association Komitas-Gentium France-Russia Karin Beshe-Golovko; Sergey Volkov, Head of the Center for Russian-African Studies of the Institute of Africa of the Russian Academy of Sciences; Member of the Board of Directors of Kazagromarketing JSC, Director of the Central Asian Consulting Company Smart Business Solutions Kubatbek Rakhimov; Director of the Analytical Center for Monitoring the Political System of Russia in Naples Ivan Marino; Head of the Department of Political Science of the Faculty of Social Sciences and Mass Communications of the FinU, Director General of the National Energy Security Fund Konstantin Simonov; Scientific Director of the Faculty of Social Sciences and Mass Communications of the FinU Sergey Belokonev; prominent statesman and public figure Alexander Torshin; Deputy Trade Representative of the Russian Federation in the Republic of India Evgeny Griva; famous Russian pranker Vovan (Vladimir Aleksandrovich Kuznetsov).