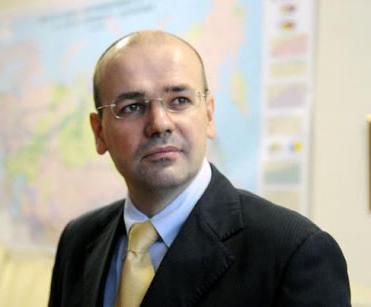 Head of the Department of Political Science, Professor.

Founder and CEO of the National Energy Security Foundation – Russia's most cited center for energy policy. He has been engaged in political and economic analysis for more than 25 years. He headed the Center for Political Conjuncture. According to the Ministry of Energy, he is a leading expert in the field of energy in the Russian Federation.

Author of numerous publications on the relationship between politics and oil and gas, including "Russian Oil: the last redistribution", "Global Energy War", "The Great Gas Game".

Author of the first textbook on political analysis in Russian.

Extensive experience in the media: he was a presenter of original programs on the TV channels NTV and Moskva24, on radio VestiFM. Long-time columnist of the newspaper "Vedomosti", radio columnist of "Kommersant FM".

A regular contributor to the leading Russian business and political media. The host of the program on the radio station "Says Moscow".

Our educational program is aimed at training political scientists and specialists engaged in expert-analytical work in state and business structures, political and business publications, electronic media, and consulting companies.

Specialists in the political science of economic processes are competent both in the issues of interaction at the level of government institutions and in the practical activities of domestic and foreign businesses.

Graduates of the program "Political Science of Economic Processes" are mainly in demand at the departments of federal and regional authorities and state corporations (47% of graduates). Analytical and information structures are the second most populous direction of career (23%). Some graduates prefer to launch their own business (11%).