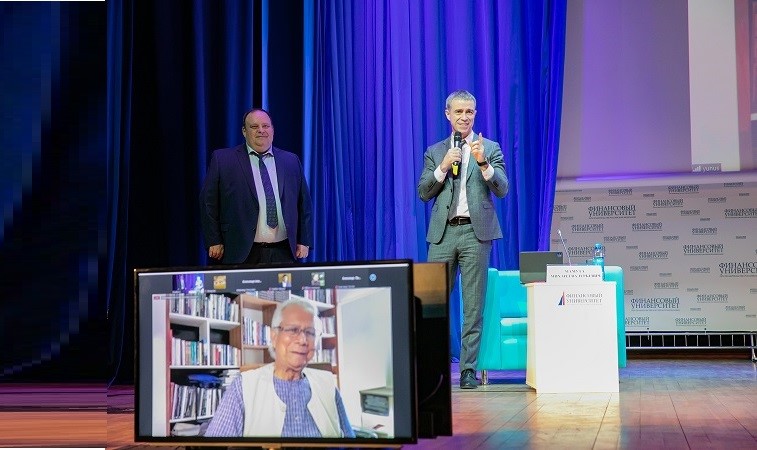 On November 23, 2022, the second day of the FinU, a lecture by the Nobel Prize laureate opened. This year’s honorary guest of the forum, the 2006 Nobel Peace Prize laureate for efforts to create economic and social development from below, Muhammad Yunus, delivered a lecture on “Creating a New World – an Economy of Three No’s: No Poverty, No Unemployment and No Greenhouse Gas Emissions”.

The meeting was moderated by Mikhail Mamuta, a member of the Board of Directors of the Bank of Russia, who in his welcoming speech noted the importance of Mr. Muhammad Yunus’ research in the field of economics. Mikhail Mamuta also added that Mr. Yunus became world-famous primarily as the creator of the microcredit system for start-up entrepreneurs and made a great contribution to the formation of the social business concept.

During the lecture, Mr. Yunus shared with the audience the history of Grameen Bank, a new type of bank designed to help solve socio-economic problems. For this purpose, a new bank structure and the system as a whole was proposed to serve the interests of people with low incomes: to provide small loans to start their own business. This system was called microcredit and has spread all over the world.

According to Mr. Yunus, it is the structure of the system that creates socio-economic problems, including the poverty problem, so it is important to change it to achieve meaningful results. The foundation of these changes, according to Mr. Yunus, can be laid by a social business focused on solving problems that arise among the population, and not only on maximizing its own profit. At the same time, the speaker noted the difference between charity and social business, which is that the funds invested in social business projects can be reused, while the money of charitable organizations works only once. Mr. Yunus also noted the relationship between the problems of poverty, unemployment and the current environmental situation.

During his speech, Mr. Yunus also answered questions from the audience about the role of the state in the economic concept proposed by him, the driving force and sustainability of the model.

The lecture was completed by the speech of Stanislav Prokofiev, FinU Rector.

“Today we took part in a lecture by one of the most famous people in the world, a man who really changed history. Mr. Yunus not only developed the theory of “three No’s”, the theory of social business, but also put it into practice: he created a world-famous bank, the only credit institution that was also awarded the Nobel Prize,” Stanislav Prokofiev said.

The Rector also expressed gratitude to Mr. Yunus and the moderator of the meeting, Mikhail Mamuta, added that the lecture was held as part of the unique project “Nobel Prize Laureates at the FinU”.

The program of the Forum’s second day was continued by scientific conferences on topical socio-economic issues.

The VII FinU International Forum “Economic Fights without Rules: Tips for Victory” is one of the leading discussion platforms for expert discussion of topical issues such as the global economy and socio-economic policy of modern Russia.